For access to the full New Welsh Review archive, become a subscriber today.

When you enter the water, you go through the looking glass surface and enter a new world, in which survival, not ambition or desire is the dominant aim….Your sense of the present is overwhelming.

These are the words of Roger Deakin, environmentalist and writer. He is describing the sensation of wild swimming in his book, Waterlog: A Swimmer’s Journey Through Britain. Deakin’s book was written in 2000, an age in which it seems to me the cult of happiness was at its climax. As Western society transitions away from seeking achievement and success towards self-awareness and mindfulness, we find that Deakin was unwittingly ahead of his time.

More and more we find self-help books endorsing the benefits of observing the present (precisely the state that Deakin describes in his description of entering wild water) and reducing one’s ambitions to simple physical goals in the face of anxiety and depression.

It is not surprising, therefore, that more and more books are appearing that extol the benefits of swimming in our country’s seas, lakes and rivers. These examine the corporeal physicality and basic pleasure of submitting oneself to the elements. Riding this topical wave are a handful of artists and practising wild swimmers that are currently featured in Aberystwyth Art Centre’s Gallery Two.

One may encounter, on entering, textile Artist Becky Knight’s ‘Under,’ a big stitch-work blanket, made in shades of blue, an outline of the human form spread across the front in a checkerboard of smooth flat stones held in place with little pockets of pale organza. Using this primitivist quilting technique, Knight has constructed a work that conveys immersion; it is enveloping like the gravity blankets popular among sufferers of anxiety that weigh the sleeper down in bed. These stones evoke the womb. Yet there is something helpless about the human form beneath, reminding me of chalk outlines at crime scenes. Underlying is a message of our vulnerability which is reinforced by Knight’s accompanying poem telling of ‘feeling tiny’ in the vastness of the sea, being ‘powerless at its wild mercy… the feeling of being held.’ Vulnerability is not restricted to the human condition however. Despite the numinous power of the ocean, it too, Knight’s work presents the sea also as being at threat. Also by the same artist, and hanging nearby is a collection of swimming costumes, lined up like Victorian bathing houses. Knight constructed these from fishing rope, old gloves and plastic bottle seals; a novel form for a serious comment on our reliance on and abuse of the world’s natural waters.

Artist and Coleg Ceredigion Art lecturer, Debbie Teakle provides a series of abstract works depicting the underwater experience. Teakle’s technical artistic background results in an intriguing approach that compares the sense of liberation that drawing can create with the act of swimming. Her large canvases, painted mostly in tones of aquamarine, are soothing to the eye but for me lack emotion. It is hard to pick up on Teakle’s passion for wild swimming, particularly in her piece, ‘Deep End,’ which attempts to convey the intensity of swimming alone in deep water, but, with its glossy, reflective surface, serves to create a barrier between canvas and viewer.

The aptly named artists Vivienne Rickman Poole and Natasha Brooks, both year-round wild swimmers, are represented with a short film each as well as featured photographs. Poole is listed as one of the 101 Inspiring British Adventurers as well as Wild Swimmer of the Year in 2017. Despite such widespread attention, she swims alone in her video. Poole describes the imagery of bodies underwater. She is acutely aware of how representations of the female form are fraught with issues, particularly regarding body shape and degrees of nudity. Seen underwater, however, the ‘boundary between human and animal is blurred,’ Poole suggests, so that the form becomes anonymous; not losing its identity entirely but rather becoming at one with its surroundings. In Poole’s underwater footage and photographs, light diffuses, empty space fills and blends into shades of deep green and blue. The pale body of the swimmer is surrounded with an aura of her own refracted light, suggesting fluid complexities a world away from the harsh contrasts above water.

Brooks’ film evokes elements of performance art as she removes her clothes, steps out of the snow and into a frozen north Wales lake. As she too swims alone; her athletic body seems misleadingly waif-like, almost as though it belongs to the realm of fairy tale, confidently gliding through the water that is barely above freezing point. ‘I am fuelled by self-possession,’ she explains, ‘I have a longing, an obsession to indulge in wild swimming.’ She has also garnered a great deal of praise; among her recent awards are first place at Y Galeri Open Exhibition in 2014 and in Women in Mountains Film Competition in 2015. Brooks seems to embody the meditative self-control so pursued by practitioners of mindfulness, and yet for me there is a frigid regularity to Brooks approach; she seems to be repressing emotion beneath her self-realisation. In her film and photographs, she is serene and controlled but still her body language conveys a sense of diminished joy. Like a modern-day Thoreau, Brooks seems to be escaping from, rather than exploring what it is to be human.

The Aberystwyth based artist and regular wild swimmer Rachel Rea is represented by a collection of abstract paintings. Her large canvases present dappled forms of geometric shapes scattered and rippling, conveying a scrambling of order as the regimented physical actions of the body lose their symmetry in the unpredictable water. Rea’s work stands out as being the only abstract work that goes beyond shades of blue and green. In her largest piece, ‘Baptism’ [pictured], varying shades of black and blue are tinged with red, suggesting the gloominess of the depths, isolation and the pain of cold water. These colours flow into a beautiful warm yellow, conveying the body’s exhilarated rush of bliss felt by so many wild swimmers as their adrenaline triggers endorphins. It is this mysterious joy that Rea attempts to capture, her title contrasting themes of death, spiritual enlightenment and rebirth, as well as power and joy that transcends the material. Rea’s works are a sophisticated presentation of the relationship between the natural environment and the mysterious phenomena of human emotions.

The exhibition left me wanting to experience for myself the thrill of wild swimming. In their varying approaches, these artists display a confidence and courage taught by entering cold and unpredictable waters. In a world that is increasingly controlled and regulated it seems important to cherish sensations of risk and the thrill of overcoming fear and pain.

Reginal Francis is blogger-in-residence at New Welsh Review, and is completing an MA in Literary Studies at Aberystwyth University’s Department of English and Creative Writing. 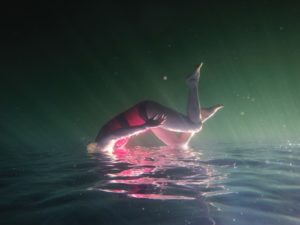