For access to the full New Welsh Review archive, become a subscriber today.

Karen Pearce is a landscape artist and colourist who operates on multiple planes of sensation. Pearce’s paintings capture the touch, taste, smell and feel of landscapes from west Wales to the Shetland islands. In her windblown beaches, cliffs and mountaintops, the movement of the wind and subtle command of colour evoke the cold and salty tang of sea spray, the soapy green taste of seaweed, the mossy aroma of ferns and the heavy hiss of winds on an open clifftop; her paintings create a vivid and corporal experience. Pearce also operates on a higher spiritual plane; the dreamlike otherness of her paintings achieve the sensation of memory or a feeling that one is glimpsing another, more vigorous world.

I recently sat down with Pearce to talk about her work. In the clear winter light we sat in the bay windows of her studio in Aberystwyth and discussed the idea of perceiving and capturing a landscape. As a landscape artist, Pearce spends a great deal of time huddling in her raincoat or stomping through the mud, trying to capture impressions in her sketchbook: it is a very physical job. Karen explained that there is far more to landscape painting than simply looking. During our chat, Pearce told me a little bit about her life, how she came to painting and how her work is entirely engaged with her experiences, both sensory and emotional, of the world around her. 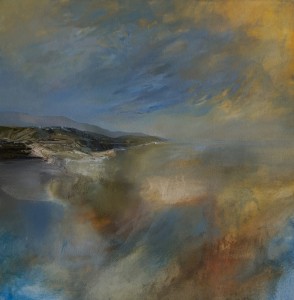 The first time I saw the artist’s work was on the wall of my sister’s bedroom. She had bought a print of New Years Day’ [pictured above] at the National Library of Wales. The serene, yet brooding use of colour and light reminded me of my first memories of the Welsh coast when I was younger; windswept and bracing, peaceful, but with the threat that a storm might arrive at any moment. Scrolling through her website you will see similar depictions of Cardigan Bay, the sea thrashing about furiously or brooding in the shadow of weighty headlands. In her recent images of the Shetland Islands and other colourful paintings (pictured below and bottom), brilliant sunlight illuminates the azure sea and dark mountains like visions of the Celtic ‘otherworld.’ Her paintings seem to represent an edgeland where the physical merges with the spiritual.

Pearce has always paid detailed attention to the images that surround her. When she was very young, her family spent some time living in Fiji and Indonesia where the bright colours and rich textures of the fabrics sunk into her subconscious. Growing up, her father was a librarian and would fill the house with the surplus coloured prints from work. She remembers works of Chagall and Gauguin as being the most evocative. These early sensual encounters she absorbed deeply, but it would be several years before she drew upon them. 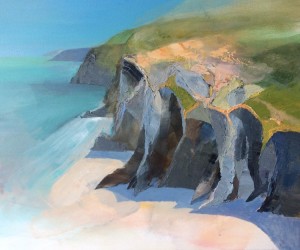 In her mid teens, Pearce went through a number of personal struggles. Finding ways of channelling negativity became a challenge, and art became an outlet for her energy. In her late twenties, she began working in charcoal and looking for guidance at Aberystwyth School of Art where the renowned artist and educator, David Tinker, gave Pearce the impetus to go beyond what she was achieving and bring colour into her work for the first time. She had a great deal of success producing semi-abstract still life works that, thanks to the sponsorship of Christies Contemporary Art, were distributed by companies such as Habitat and Ikea, giving Pearce an international reputation.

It was only after several years that the artist decided to approach painting with an academic agenda. Taking her degree at Aberystwyth University, she found herself being challenged by progressing from purely commercial art towards capturing ‘the truth.’ For the first time, Pearce was aware of the context in which she was working but it was more of a hurdle than she had expected.

During this time she felt angry, as if she didn’t know where she was or what she was doing. Pearce felt her her paintings were ‘ugly and messy’. Her frustration re-manifested itself in her painting. People were less attracted to her work than they had previously been but, though this was painful, it was a vital stage of evolution in Pearce’s career.

Over time, she has honed her own unique process and no longer feels that her work is an attempt to ‘fix things’ or prove anything. ‘What I value more than anything is peace, I need peace more now than the ups and downs or the drama that I have previously felt in my work.’ When a painting ‘feels’ right, she explained, then she knows she has succeeded. ‘It is mysterious to me and wrapped up in a feeling of a power greater than myself.’

Having a closeness with the landscape also provides another dimension to Pearce’s work. For her, the significance of a place is all about experience. The history one has with a place makes a profound, subconscious impact. Having grown up in Aberystwyth, Pearce obviously feels a deep intimacy with the town and this is reflected in the broad variety of her responses to it.

On occasions, her paintings have been filled with light, capturing the same pale Welsh sun that shone through the window of her studio as we talked. At other, more difficult times, however, Pearce’s work has been darker. Her process is clearly affected by her life; the paintings portray her world through the lens of her experience.

Pearce’s most recent and exciting progression has been inspired by trips to the Shetland Islands with her partner. These expeditions into the wild north of Britain resonated deeply with Pearce and have greatly affected her work. Shetland, being a big open space without trees, is like a ‘spiritual wind tunnel where you can’t hang on to anything.’ She adds, ‘I think being in love also makes a big impact. It opens every sense.’

Her recent residency on the islands have also contributed to changes in technique. Pearce has switched to acrylics and is currently returning to the tonal and structural styles of her pre-degree work. ‘I feel now that I am integrating my early experiments back into my art.’ Her use of colour is significantly more powerful at the moment, with dazzling green clifftops and black rock walls of stone splashing down into deep turquoise water. This is a brightness that is, perhaps, reminiscent of her early experiences of colour as a child in the Far East. Pearce’s current work can only have been achieved through years of diligent attention to images and colours as well as many personal stages of maturation and spiritual openness.

Having got to know Pearce better during my visit I find that the idea of intimacy offers a key to her work. Claude Monet once wrote that a ‘landscape does not exist’ because of the constantly fluctuating light and air that surrounds a subject. For Pearce, the same rule applies, with the added caveat that the painter herself progresses through an equally dynamic process of emotional and sensual fluctuation. When we come across a Karen Pearce work, therefore, we are being invited to witness the profoundly personal relationship with the artist’s locations of significance and her emotional state at that moment in her life. For me, it is a privilege to be given this level of insight: having met and spoken to Pearce, the beauty of her paintings are intensified. Here is an individual who shares her pain, her joy, her anger and euphoria with the world. Viewers may simply admire her expressive and exciting work or we may go deeper and identify with them and recognise our own undulating feelings in the peaks and ripples of her brush strokes.

Reginald Francis is an MA candidate in Literary Studies in the Department of English and Creative Writing at Aberystwyth University. @regfrancis95 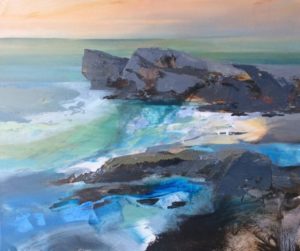