‘River’: TIM COOKE announced as the winner of the New Welsh Writing Awards 2022: Rheidol Prize for Prose with a Welsh Theme or Setting.

In the 2022 Award Ceremony, New Welsh Review  was delighted to announce Tim Cooke as winner of the New Welsh Writing Awards 2022: Rheidol Prize for Prose with a Welsh Theme or Setting, made possible thanks to the generous support of long-time subscriber RS Powell.

Tim Cooke has won this year’s annual awards with his blended nonfiction book, River. Tim wins a £1,000 advance against a general publication under the New Welsh Rarebyte imprint, a positive critique by leading literary agent Cathryn Summerhayes of Curtis Brown, and a year-long subscription to New Welsh Review.

River is framed by a journey along the edge-lands of River Ogmore, Bridgend, and true crime cases of missing or hurt children by an author who was a child during the case of the murder of toddler, James Bulger, by two children, and has a personal understanding of what is now termed ‘dark play’. 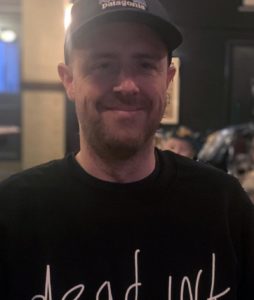 River is a piece of experimental memoir/place writing that uses the River Ogmore in Bridgend to shape the narrative. By presenting a series of real events, memories and fictions connected in some way to the flow of the river, the writer explores, predominantly, the small, private tragedies of any given childhood. He draws more widely on infamous examples of violence committed by children – and what has been written about these incidents – and touches on theories of ‘dark play’. Integral to this essay are issues of ethics, memory, reflexivity and narrative.

Tim Cooke is a teacher, writer and creative writing PhD student. His work has been published by The Guardian, Little White Lies, The Quietus, 3:AM Magazine, New Welsh Review and Ernest Journal. His creative work has appeared in various literary journals and magazines, including the New Welsh Reader, The Shadow Booth, Black Static, Hinterland, Epoch, Porridge, The Nightwatchman and Litro. Tim’s debut collection of short stories, Where We Live, was released by Demain Publishing in November 2020. He’s had a piece of creative nonfiction published in a Dunlin Press anthology on the theme of ports and is currently working on a collection of essays. He won the 2018 New Voices in Fiction competition, run by Adventures in Fiction, and was a runner-up in UEA and the National Centre for Writing’s New Forms Award, 2020

New Welsh Review editor, Gwen Davies judged the awards for the eight year in a row and her adjudication of Tom Cooke’s piece is as follows: “Set along the Ogwr or Ogmore river, this essay collection or blended nonfiction interweaves writing of place, memoir and a searing look at the author’s own childhood and how memories of that time cloud and clarify his current behaviour. This writing is perceptive, empathetic, full of self-knowledge and guided by ethics. The section I read on his helping find a lost child at Hay Festival is paced like a crime novel in which a ‘do-gooder’ feels strangely like a perpetrator, because of media conditioning and his own past. In developing the manuscript, Tim Cooke proposes a book or long-form essay using the case of toddler old James Bulger’s murder by two 10-year old perpetrators as a frame. The Ogmore riverbank is the setting, and it is the past scene of instances of ‘dark play’ and bullying by the writer & his elder brother. Despite these gruelling subjects, I am certain that Tim, with his longstanding and genuinely urgent probing, in his published writing, of memory, media, repression and lost or hurt children, will produce superb work that will lead to enlightenment as well as lightening the load of so many readers, especially men, with whom such themes resonate. Fittingly, among this year’s competition entries, with their focus on loss and retelling, Tim’s exploration of how identities evolve may well lead to a look at how the erasure of former identities is not always about loss, but can bring about growth.”

Sponsor RS Powell says: “This is the fourth year of my sponsorship of the Rheidol prize. The standard of entries is as high as ever – lockdown has allowed writers to reflect on their world. Their work approaches Wales from many angles – historical, satirical, experimental, to name but three. I commend it to you, and hope it will find an appreciative readership.”

The piece of highly innovative nonfiction that I judged was taken from a wider essay on women in the Welsh woollen industry and how they have been erased. Into this is woven memoir, evocative writing of place, and the very stuff of making blankets. Hattie’s work has an engaging style and immediate voice, it is experimental, touching, crafted and very female.

In second place in the main prize is also “The Half Place” by Hattie Morrison.

The awards were set up in 2015 to champion the best short-form writing (under 30,000 words) and were open to all writers based in the UK and Ireland plus those who live overseas who have been educated in Wales. The winner of the Rheidol Prize for Writing with a Welsh Theme or Setting in 2021 was Jasmine Donahaye with “Reading the Signs”. Her book Birdsplaining (a development from “Reading the Signs”) will be published on our imprint in January 2023.

The 2022 awards are sponsored by subscriber Richard Powell and are run in partnership with Curtis Brown, Gladstone’s Library and Literature Wales’ Tŷ Newydd Writing Centre. New Welsh Review is supported through core funding by the Books Council of Wales and is hosted by Aberystwyth University. 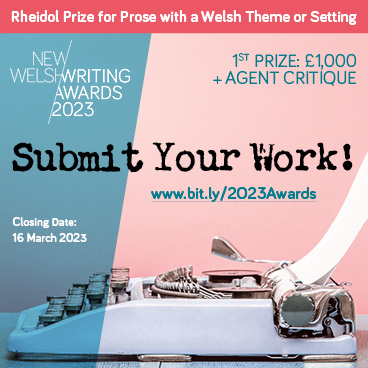 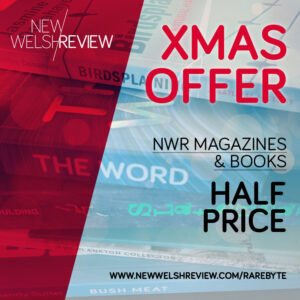